Dominic’s practice includes commercial, property and personal injury (including credit hire). He is a registered Civil and Commercial Mediator with the Civil Mediation Council, and offers online and telephone mediation services at www.ResolvedOnline.com.  Dominic also edits Jus Cogens, the online journal providing news, expert analysis and compelling opinion on public and private international law for those with an international aspect to their practice.

His Honour Judge Dight CBE, Resident and Designated Civil Judge, Central London and Mayor’s & City of London Courts, concluded that the second edition of ‘A Practical Guide to the Small Claims Track’ is “essential reading … for all practitioners who handle small claims [and that] the judges of the county court (whether salaried or fee-paid) would benefit considerably by reading this book and keeping it by their side”.  The second edition received four judicial testimonials.

Dominic can be instructed directly, without having to involve a solicitor.  He is registered on the Direct Access Portal.  Dominic is also a member of Advocate (the Bar’s national charity), matching him with members of the public who need help, are unable to obtain legal aid, and cannot afford to pay.

Prior to pupillage, Dominic was judicial assistant in the Court of Appeal to Sir Brian Leveson, the former President of the Queen’s Bench Division.  He was also researcher in construction law at a leading set of barristers’ chambers, public international law at the British Institute of International and Comparative Law, and national implementation measures (nuclear disarmament, non-proliferation, development and use of chemical weaponry) at the Verification Research, Training and Information Centre. Dominic is an Associate of King’s College London. 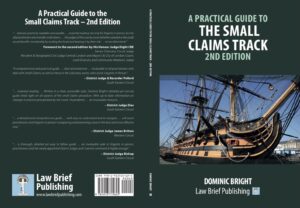 Dominic assists authors to publish academic articles and professional texts on national and international law.  He also publishes in his own right.

Dominic has a particular interest in advising on commercial use of novel technologies, including small, unmanned aircraft, on which he wrote a leading article: ‘Drones, Airprox, and the Regulatory Environment: Cause for Concern?’